Woe, Is Me – American Dream EP 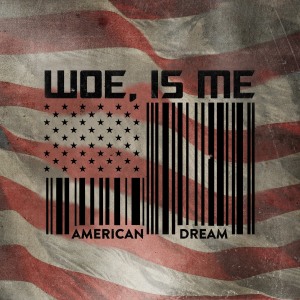 I’ve recently checked out the latest release from now big time act Woe, Is Me. Entitled “American Dream EP”, the release is strong, fast, and has amazing production work. I never really enjoyed listening to the last album from Woe, (Genesis) so I was really skeptical when I pressed play. Little did I know how much I was going to enjoy this release.

Starting off heavy, the American Dream EP from Woe, Is Me comes at you fast and with a lot of energy.

The opening track entitled “Stand Up” still has some elements of Woe, Is Me’s previous release, (Genesis), with the machine-like breakdown and effects, as well as an extremely catchy chorus and sweet clean vocals. However I enjoyed this much much more. In the last release, I felt as if the band over used the machine effects and the singer enunciated his words way too much. Ultimately, it was annoying and I didn’t like that. This song however, doesn’t do that.

The EP follows suit of the first track, and is not a disappointment. Awesome lyrics, choruses that make you sing along, and breakdowns that make your head bang unwillingly fill the next two tracks.

Tracks 4 and 5 (the last two tracks of the EP) do take a different direction however, as they’re two acoustic tracks that showcase clean vocalists Hance Alligood’s skills.

Perhaps there will be more of these acoustic tracks in the future? If so, it might not be such a bad thing!

All in all, I really enjoyed this release. I’ve listened to it front to back multiple times and get lost in it throughout my day. However, I wouldn’t say that this release is groundbreaking or monumental in any way. It’s a solid release from the band, don’t get me wrong. Great production, awesome lyrics, good breakdowns and catchy choruses fill the EP front to back. Woe, Is Me even did a great job on making their own sound in this scene and tweaking it just enough to make it even better than before.

Is the EP worth you purchasing? Definitely! Fans of Woe, Is Me are gonna love the EP and they’re gonna enjoy it as much as I did. I’m excited to continue to listen to this again and excited for what’s in store for the band. On August 5th, Woe, Is Me’s official twitter page announced that they will be in the studio to record their third album sometime in October with Tom Denney (ex- A Day To Remember lead guitarist) to record their new record. I only see good things coming from this point on.