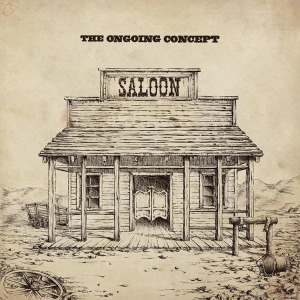 When was the last time you listened to a clip of a metal album and thought to yourself that it could possibly be a country album that you were actually listening to? What about the last time you’re listening to the same album and you hear a banjo lick right before a very Chariot-styled breakdown? The Ongoing Concept is going to change that very quickly.

Not only does this band impress me with their originality (which they proudly boast), they showcase their personal abilities by recording and producing the album on their own (minus the drums), creating their own album art, designing their own merch, and even releasing their first EP on their own.  The band consists of four members, three of whom are brothers and the youngest of which barely at the ripe old age of 15. The fourth member being a close friend and playing bass, is equally as important as the others in the mix of elements on the album.

The band claims to want to make music not for today, nor for tomorrow, but music that’s going to considered timeless. Music that you can still jam out to on your iPod four, five, even ten years from now. And for myself personally, I’d say they’re doing a pretty good job. Only a handful of albums have made that list, one of which being Underoath’s “They’re Only Chasing Safety”, but I can definitely foresee this band possibly being on the list if they continue to grow and refine. But then again, how much closer could 3 brothers and a best friend get?

So many different styles of music overlay this album that you’ll be hearing something new on every track. Southern banjo licks and honkey tonk pianos accompany spoon clapping and raw vocals, all of which seem to be going everywhere yet somehow mix and fit so well with each other, as if you saw it coming, even though you didn’t.

Fast paced tracks such as “Like Autumn”, “Saloon”, and “Cover Girl” keep my feet tapping with and my head shaking and make the album what the band wanted it to be, fun. The slower and softer songs keep the album from being overwhelming and show that the band has way more talent than just playing guitars banging drums. And a female feature on the last track “Goodbye, So Long My Love” really takes things away and gives something to the metal heads that maybe they haven’t heard in a while.

With only one small vocal clip on “Sidelines” that I feel could have been done better, this album is near greatness, if not at least totally amazing. I’d recommend this album for someone looking for something new, something different, but something familiar at the same time and something they can blast in their speakers and play air guitar with. I’ll keep this album playing on my phone for a while.

The Ongoing Concept is: